The Fond Insistence to Construct an Ashram 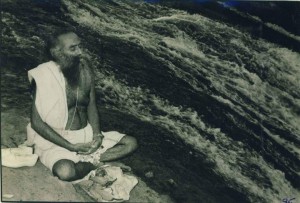 When the disciple persuaded gurudev to construct an ashram he said with a smile, “The ashram shall be constructed whenever it is destined. As for now, I live in my small house ‘Dharmamegh’.

“A short time ago, an Indian yogi came to meet me at ‘Dharmamegh’ with some of his American disciples. Showing the 12’x10’ roo, I told them, ‘It is the room where I worship God, perform meditation, undertake arduous efforts for self-discipline and the attainment of self-realization; where I contemplate, reflect and study, meet saints and spiritual personalities. It is also my writing room where a number of books have been conceived. It was here some divine experiences occurred to me. It also serves as my sitting-room as well as bed-room. The cot lying in the room is my bed and I also use it as my chair. The edge of the window just above my bed serves as my desk and table. I keep my stationary like pen, pencil, rubber, etc. there.”

My narration left the yogi astounded. He said, “Though you have such a small place, you do not give consent to your well-wishers to build an ashram in spite of their fond insistence. Such is the stuff you are made of. And look at us! We live in discontent despite having a number of ashrams spread over thousands of acres of land.”

Even without an ashram Gurudev lives in bliss and will continue to live in this state of mind with it. He says:

A cloth, three fingers wide, covers my body,
and I eat vegetables cooked without salt;
still with the Lord dwelling in my heart,
I live in bliss that makes Indra stingy!

“At present, my time flows reciting these lines. I have lived my life with this state of mind and now a few years have left.

There is no dearth of people who strive hard to attain their worldly wishes. Today, the time demands people who are wise enough to think and believe that their own welfare lies in attempting for others’ welfare and pouring some wise things into their ears. Such people can become the foundation stone of the Ashram.

“As the saying goes, “The stalwarts have passed away leaving their footprints behind, when the great personalities who have laid the foundation of ashrams, monasteries and temples with their lofty ideas pass away, people with immense wealth, large stomach and huge appetite as well and with parasitic instinct remain behind the ashrams which were established with a view to uplift people from moral decline and make them self-reliant are seen metamorphosed into a den of such activities that defies the rules and norms set by their great founders, one is faced with the question, “Isn’t my home a better place than ashram?”